Do flip flops change how you walk?

This began with a simple question: does griping the forefoot and toes to hold onto a flip flop cause changes in the gait, specifically the movement of the thoracic spine? TL;DR yes. Not only does it change the thoracic spine’s movements, it exaggerates the existing movement patterns throughout the body.

First, a quick biomechanics detour. In Anatomy in Motion’s Flow Motion Model (the map of what all of our joints do in 3 dimensions during all the phases of our gait cycle), we observe that the 3D movements of certain portions of the foot move at the same time and in the same directions as one or more other body parts. The details of the model are proprietary, but suffice to say that the movements of the forefoot and toes are the same as the torso. Not only are they represented that way in the model, but we find that in real actual humans, when the toes move in a certain direction, so goes the torso. We are all just one big interconnected machine.

I also know from my observations over the years that when our body is challenged by something, we default back to our tried-and-true movement patterns. That challenge can be a stressful interaction, having to pick up something heavy or suddenly catching yourself as you discover the floor isn’t as level as you’d assumed. Even if we’ve been working on restoring our movement patterns, until they become locked in as habitual, we will default to our old patterns. A challenge could be as simple and minor as a shoe that won’t stay on unless we hold onto it, like a flip flop.

Anecdotally, I’ve spoken to a number of people who have said they don’t think they grip onto their flip flops or notice any changes in their walk when they wear flip flops. But I have heard a number of people say that they get stiffer necks and shoulder tension in the summer, when they also wear more slide-like shoes, such as flip flops. So I was curious whether using a camera to capture what’s really going on could help settle some of this uncertainty.

My case study involved three anonymous humans willing to capture gait videos of them walking with and without flip flops (or similar shoes that they have to grip onto so they don’t fall off) facing away from the camera to conceal their identity. I uploaded the videos into the Coach’sEye app, used the side- by-side comparison tool and tethered the videos together at the exact same frame in the gait cycle. Then I examined the motion of each video frame by frame looking for deviations from the Flow Motion Model and differences with and without flip flops. I took screen captures wherever I found something of note.

The three main findings were: 1- the act of holding on to the shoe changes the movement patterns of both the forefoot/toes and the torso, 2- wearing a flip flop coincides with an increase in torso tension or slouching, and 3- people’s movement strategies are even more pronounced when wearing flip flops.

Let’s examine those one by one and check out the photos below to see what I mean.

Changes in forefoot and torso movements

The movement strategies that I noted included a strong frontal plane dominance in the spine, a head that stays laterally flexed to the right, a hiking pelvis that stays hiked for several phases, a torso that remains flexed throughout the gait cycle, a rapid movement into pronation after heel strike, 5th metatarsals that don’t stay on the ground in the propulsion moment of gait, and a narrowing of the distance between the legs.

Holding onto the shoe was found in each of the participants. In our ideal gait pattern, when the foot swings out to the front before heel strike, the toes are extended (pointing up to the sky). In the participants, the toes were facing down to the floor as they were holding onto the shoe. I captured the moment when the leg swings through from underneath the body to out in front of the body to note this pattern. This was observed in all of the barefoot comparison videos, suggesting that the foot shape changed from pointing up to pointing down in the presence of the shoe.

Increased rounding or tension in shoulders

Along with the toes pointing down with the shoe on, I noted that the torso was in a flexed (or hunched forward) shape or showed signs of tension (less arm swing and ribcage rotation) at the same time as the shoe was being griped with the toes facing down. In Anatomy in Motion’s Flow Motion Model, the movement of the toes maps the movement or the torso. The consequence of wearing the flip flop appears to coincide with an increase in shoulder tension.

Everyone has movements that deviate from the Flow Motion Model as a consequence of injuries or repetitive patterns and the negotiation the body makes to maintain optimal efficiency under these conditions. The introduction of a flip flop caused the participants’ movement strategies to be exaggerated. One participant had a great lateral swaying action in their gait. Another had a prolonged length of time spent in a hiked hip and laterally flexed spine position. Another kept their legs closer together underneath them and avoided shifting their pelvis side to side. One participant exaggerated the rotations of their pelvis to the right. The challenge of holding on the flip flop caused their bodies to have to work harder by doing bigger versions of their regular movements. Wearing flip flops caused their movement strategies to be more obvious to the viewer.

Disclaimer: this is not a post to slag on footwear or people’s choices. It’s simply to draw attention to how the body adapts to changes such as footwear that requires us to move differently. Wear flip flops. Shun flip flops. It’s not important to me. But please do get curious about your body and the amazing clever ways it gets you around. 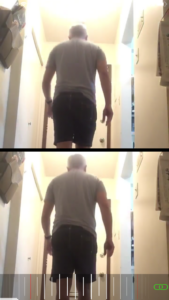 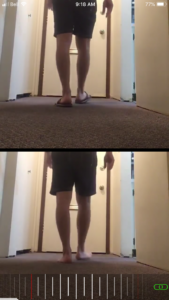 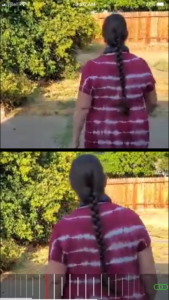 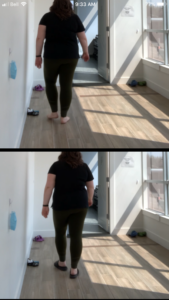